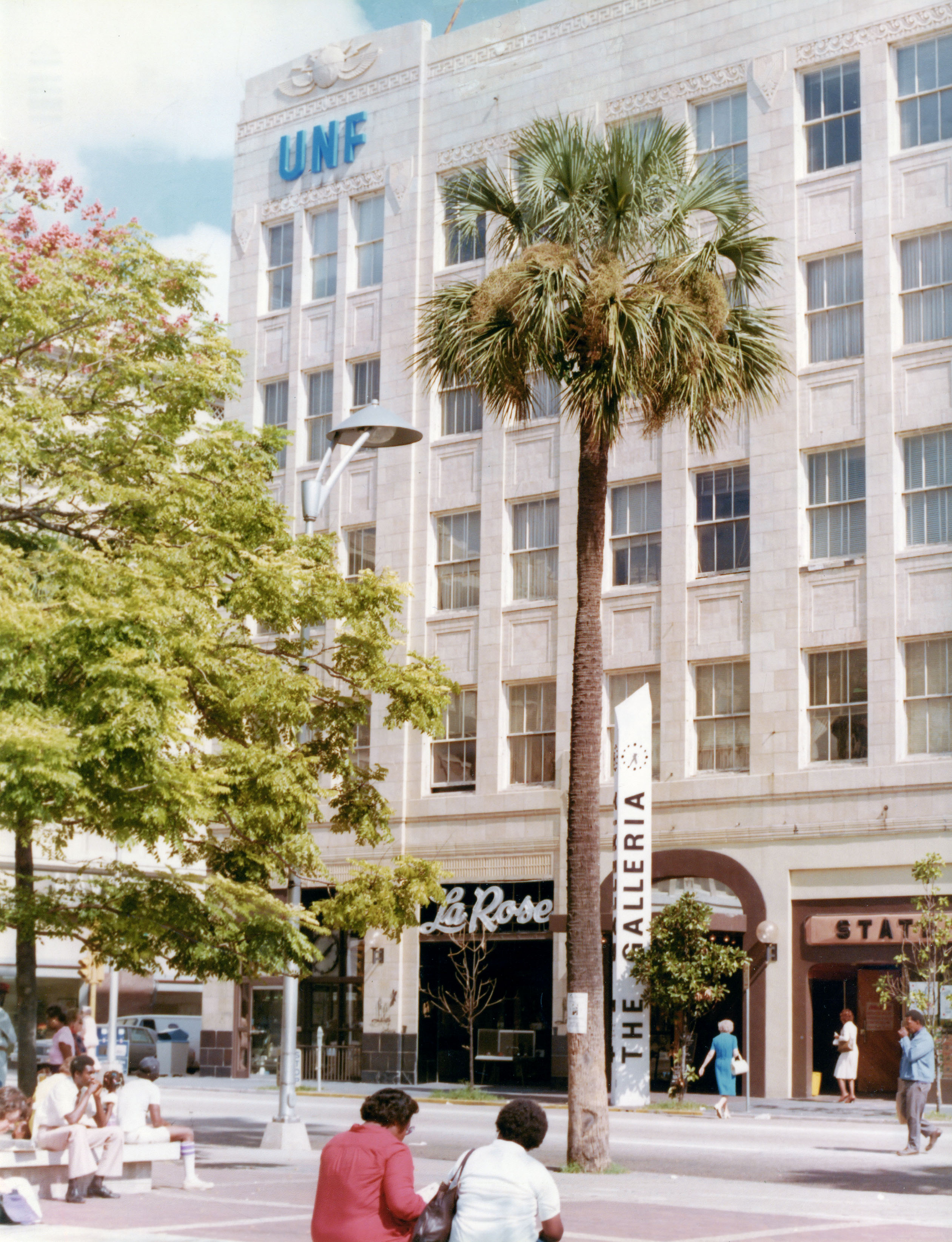 From 1978 to 1987, UNF operated a Downtown Center in the currently named MOCA building, at 333 North Laura Street, at the corner of Duval Street overlooking Hemming Park. This building was then called the Galleria, with retail shops on the first floor. In opening the Center, the University hoped to make courses more accessible to inner city, Northside and Westside residents, and to major downtown businesses. At that time, there were no bus routes to UNF's main campus on the Southside, and transportation issues were a major consideration in opening the Center in the core of urban Jacksonville.

Approximately 8,000 square feet of space on the fifth and top floor of the Galleria building was remodeled by UNF to include eight classrooms, five office spaces, a student lounge, small library, and a reception and registration area. Classes opened in the Center on Sept. 25, 1978, with an enrollment of 1839 students in the first year. The Center offered a limited range of upper division and graduate courses drawn from Arts and Sciences, Business, Education and General University curricula.

For the first three years, enrollment continued to climb, and reached a peak in 1981 with 2247 students. After that, enrollments started to decline steadily, attributed to factors such as a sluggish economy with cutbacks in student aid, a decrease in the number and type of courses offered at the Center due to low enrollment, and the beginning of bus routes operating to the main Southside campus. Only 428 students were enrolled in 1987, and with the rising costs of maintaining the site, the Center in the Galleria Building closed in August 1987.

After the closing of the Galleria site, UNF continued to maintain a downtown presence. In December 1987, a UNF "Downtown Service Center" (DSC) was opened on 45 W. Bay Street on the first floor of the Drew Building. Classes, mainly in specialized fields such as health, criminal justice, and business, were not held at the Center itself, but in various buildings throughout the downtown area. The DSC served mainly as a site where students who lived or worked downtown could register, pay fees and receive information on UNF. During the 1988 winter term, 211 students enrolled in 24 off-campus courses at 13 locations served by the DSC. The UNF Downtown Service Center closed on August 30, 1990.

In 2009 the UNF Board of Trustees approved the plan to take over the operations of the Museum of Contemporary Art Jacksonville (MOCA), coincidentally housed in the old Galleria Building. Under the terms of the arrangement, UNF became the building's leaseholder and controlled of most of MOCA's 800-piece collection.