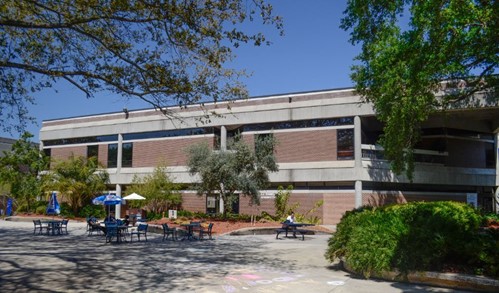 The UNF Administration Building was named for Jacksonville attorney, businessman, and civic leader Jaquelin James "J. J." Daniel in recognition for his leadership in the founding of UNF and his many contributions to Jacksonville and higher education in Florida. For more than 15 years, he served on the Florida Board of Regents (1971-1982) and its predecessor, the Board of Control (1957-1961), and chaired both Boards during his tenure. His legacy shows he was a leading advocate of accessible public university education and academic freedom.

Mr. Daniel was the guest speaker at UNF's second commencement on August 26, 1973. He received an honorary Doctor of Letters from UNF on August 5, 1989 and was awarded the E. T. York Distinguished Service Award posthumously in 1990 for his contributions to higher education in Florida. At the 1991 Daniel Hall dedication, former Florida Governor Reubin Askew characterized Daniel as a "great man who loved life and never ceased to contribute to it." Governor Askew recalled that naming Daniel to the Board of Regents was his first appointment as governor.

A lifelong resident of Jacksonville and descendant of one of the city's pioneer families, J. J. Daniel was known for his strong commitment and service to community and charitable causes. As Chairman of the Local Government Study Commission, he played a key role in fostering Jacksonville's consolidated government in the late 1960s. He was publisher of the Florida Times-Union and Jacksonville Journal from 1976 to 1982. He died on August 7, 1990.