The Thomas G. Carpenter Library has collaborated with the Department of Art and Design to provide a dedicated student gallery space, the Cynthia and Walter R. Graham, Jr. M.D. Student Art Gallery, on the second floor of the Library. The space is curated by Art and Design Faculty in order to showcase student work from classes across the Art and Design program, with exhibits changing on a rotating basis throughout the calendar year.

All gallery events are free and open to the public 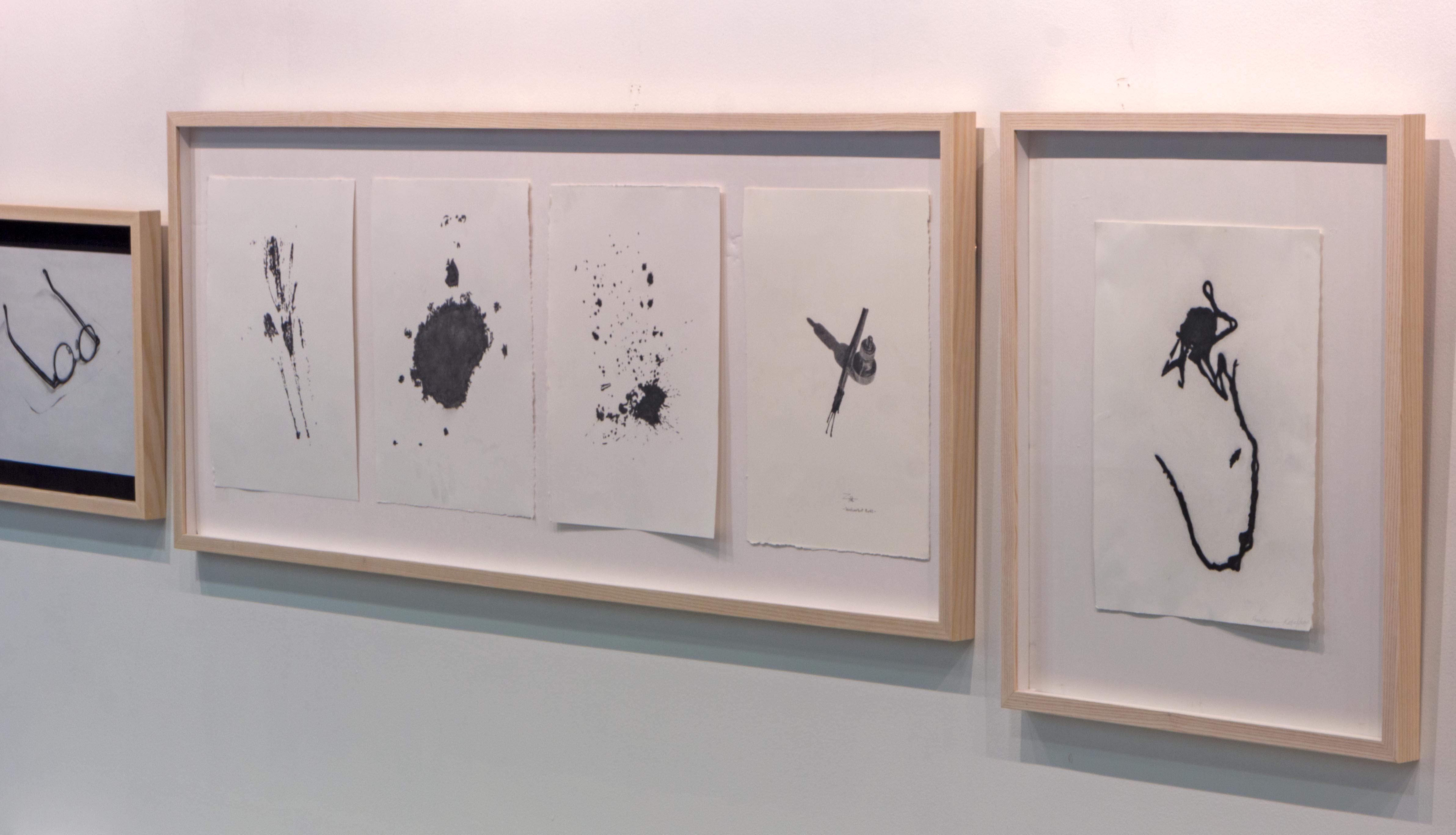 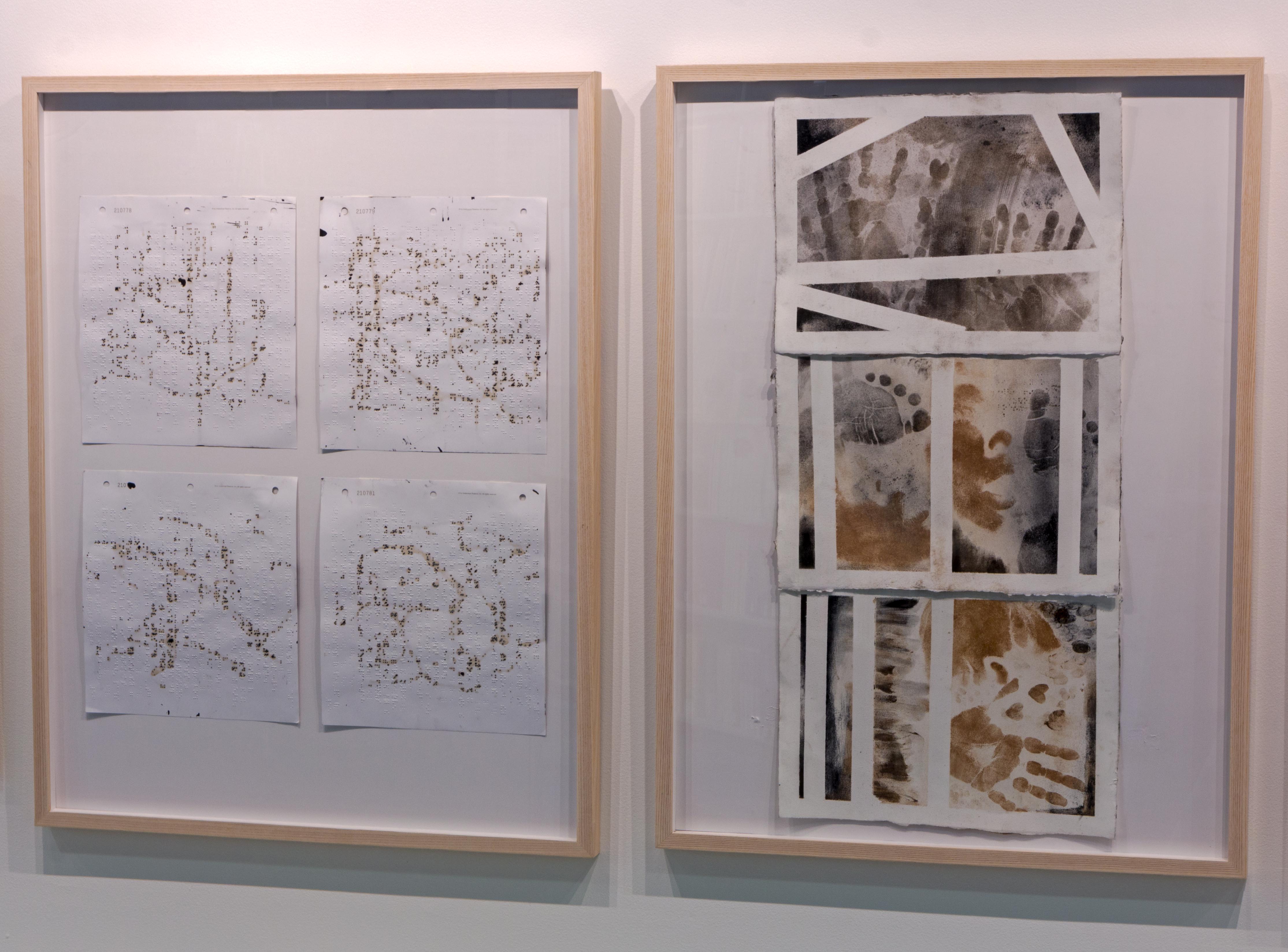 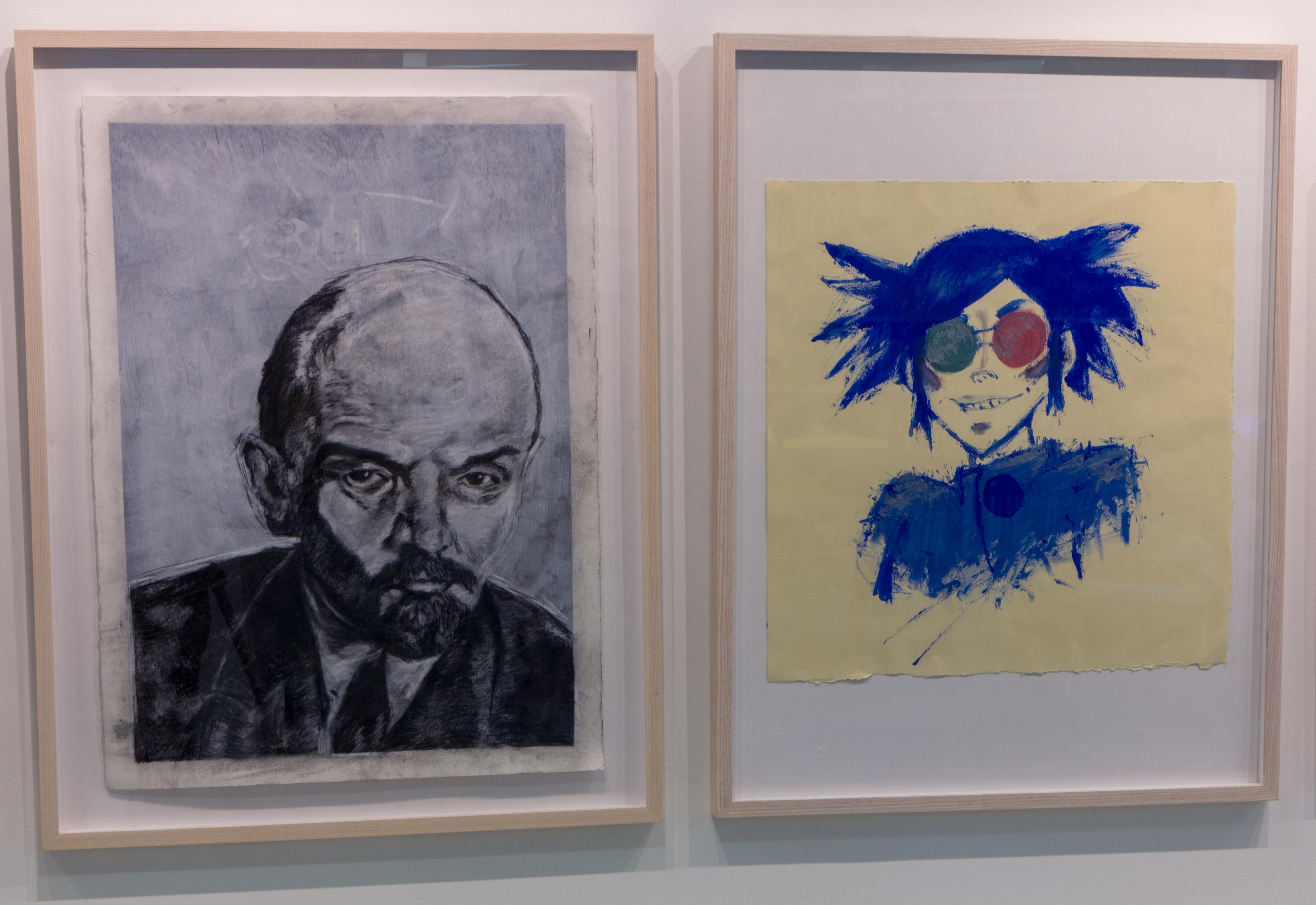 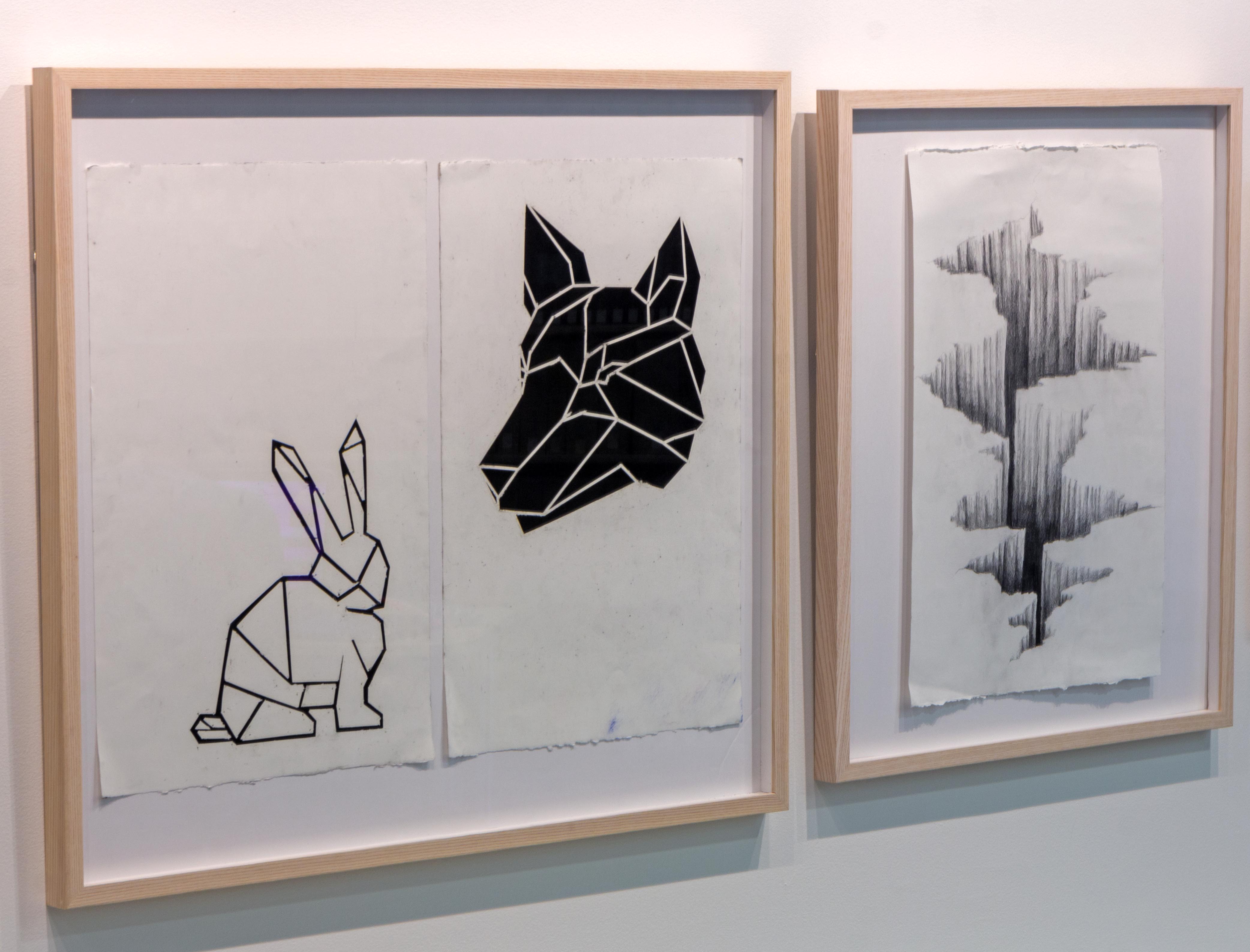 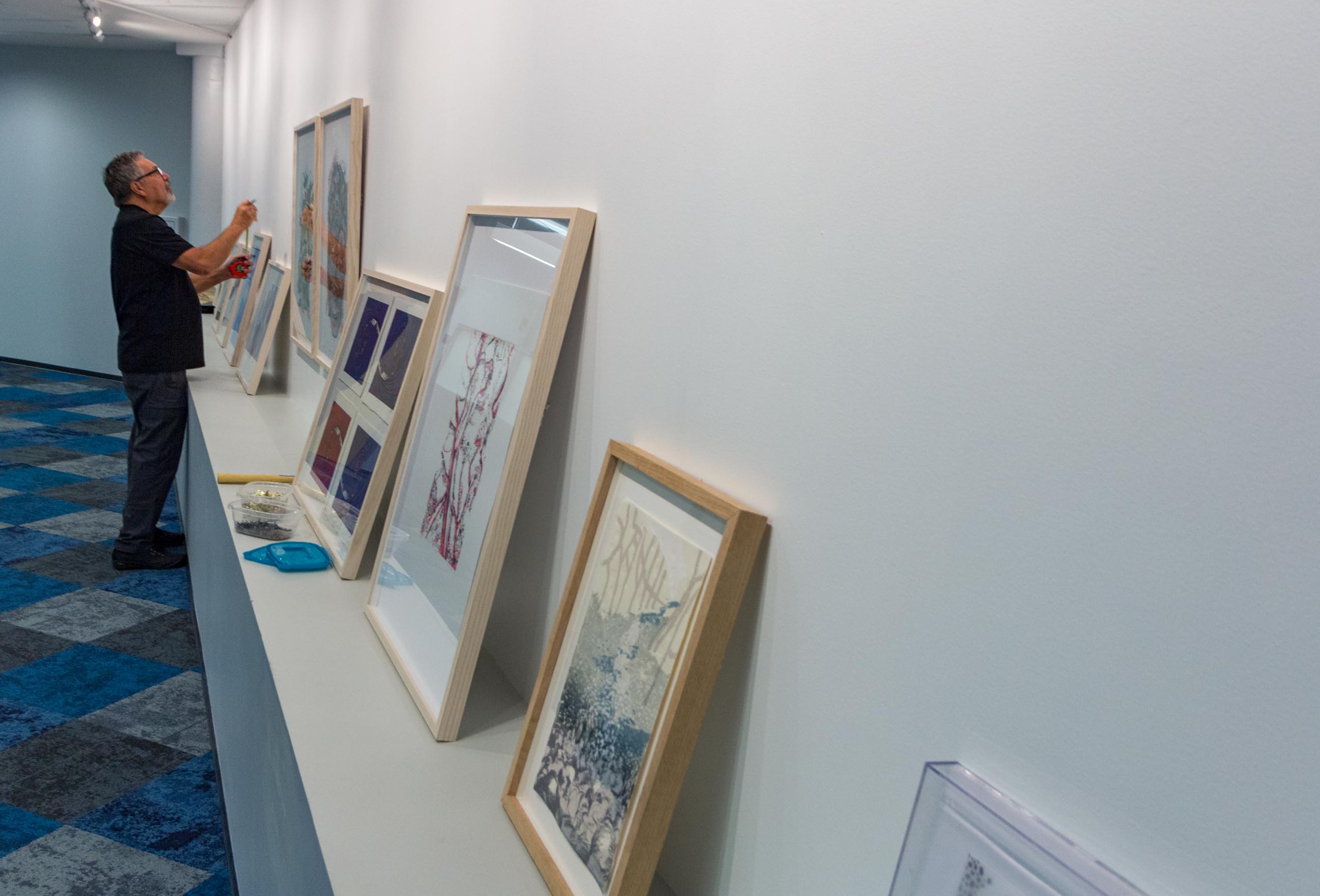 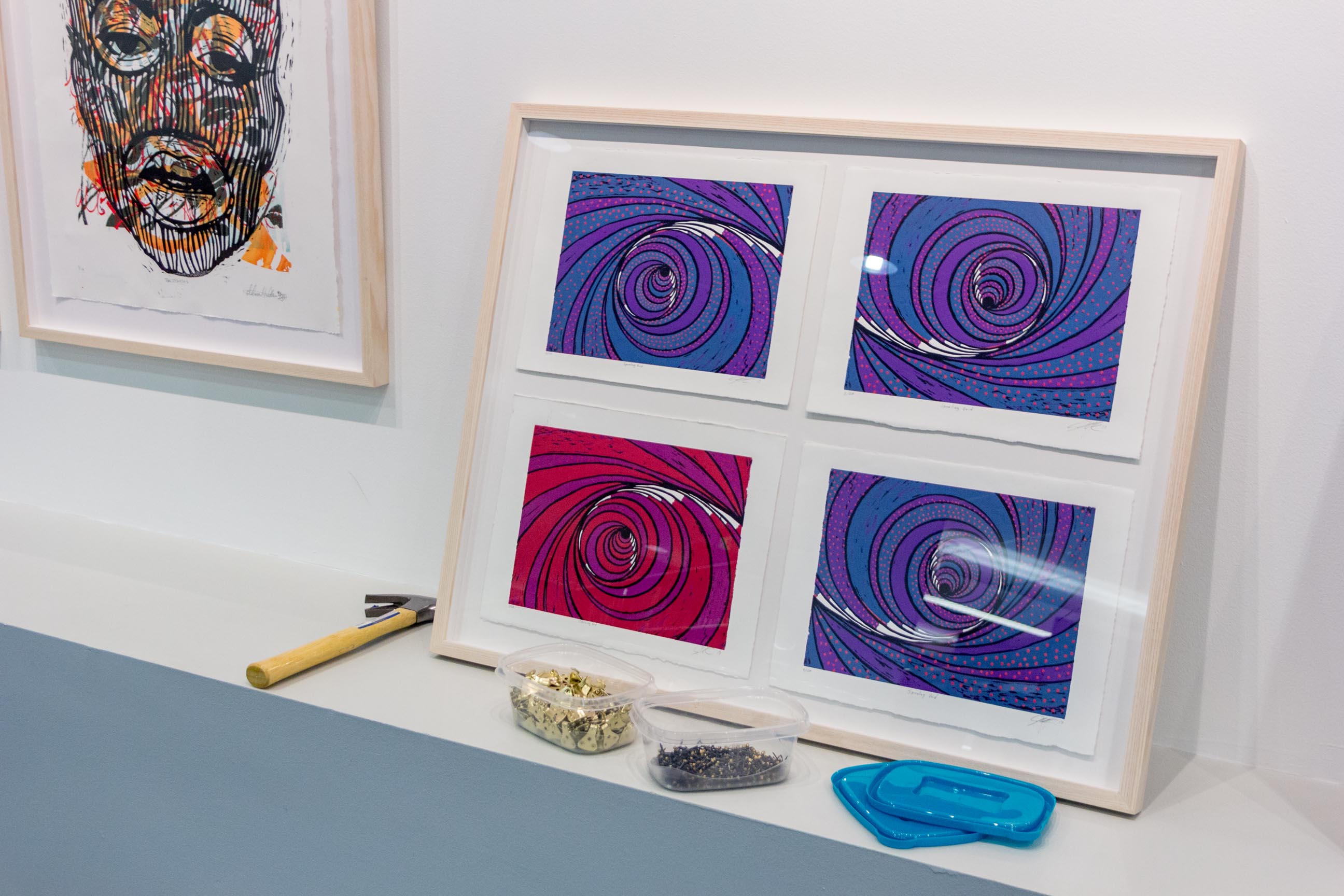 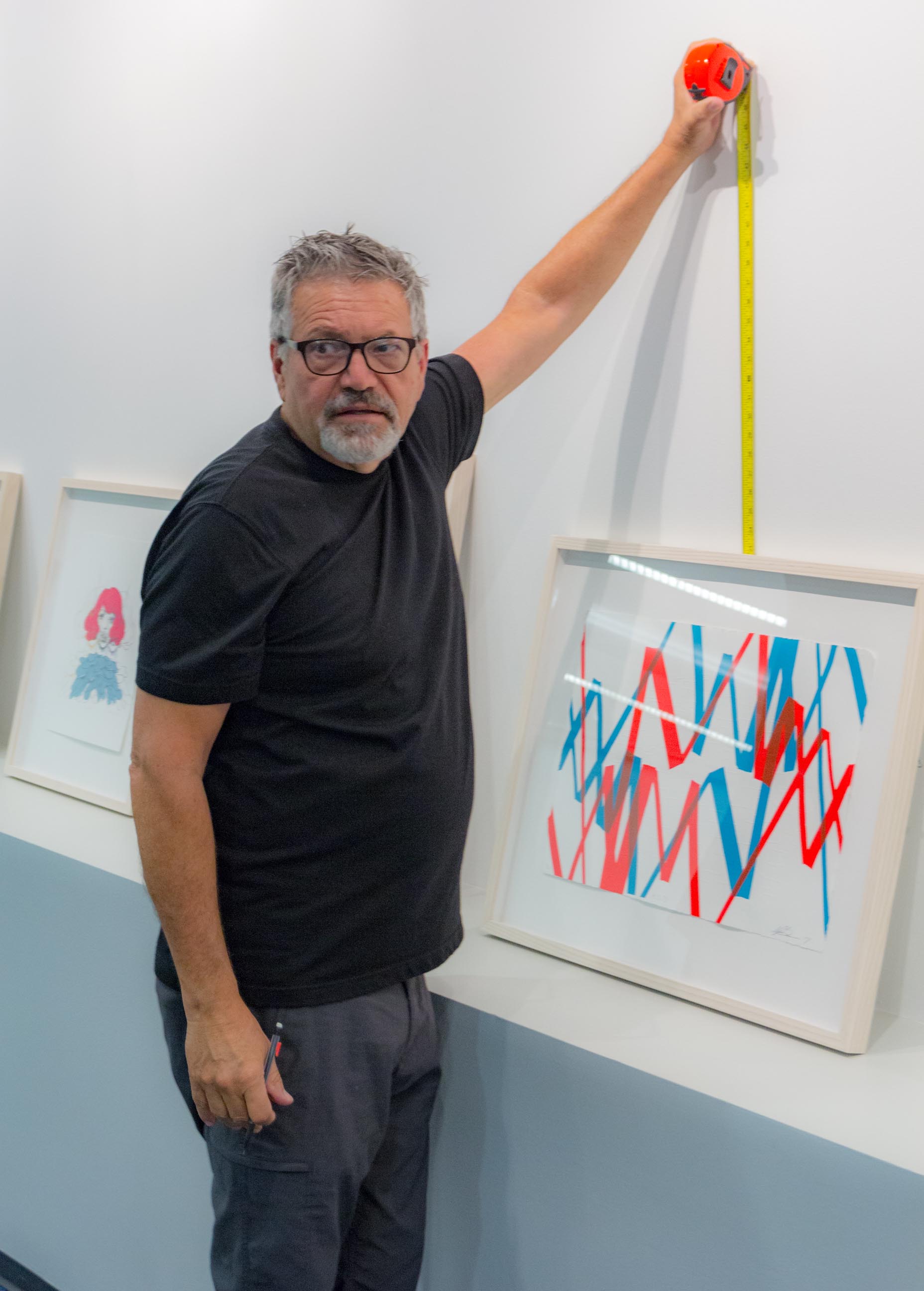 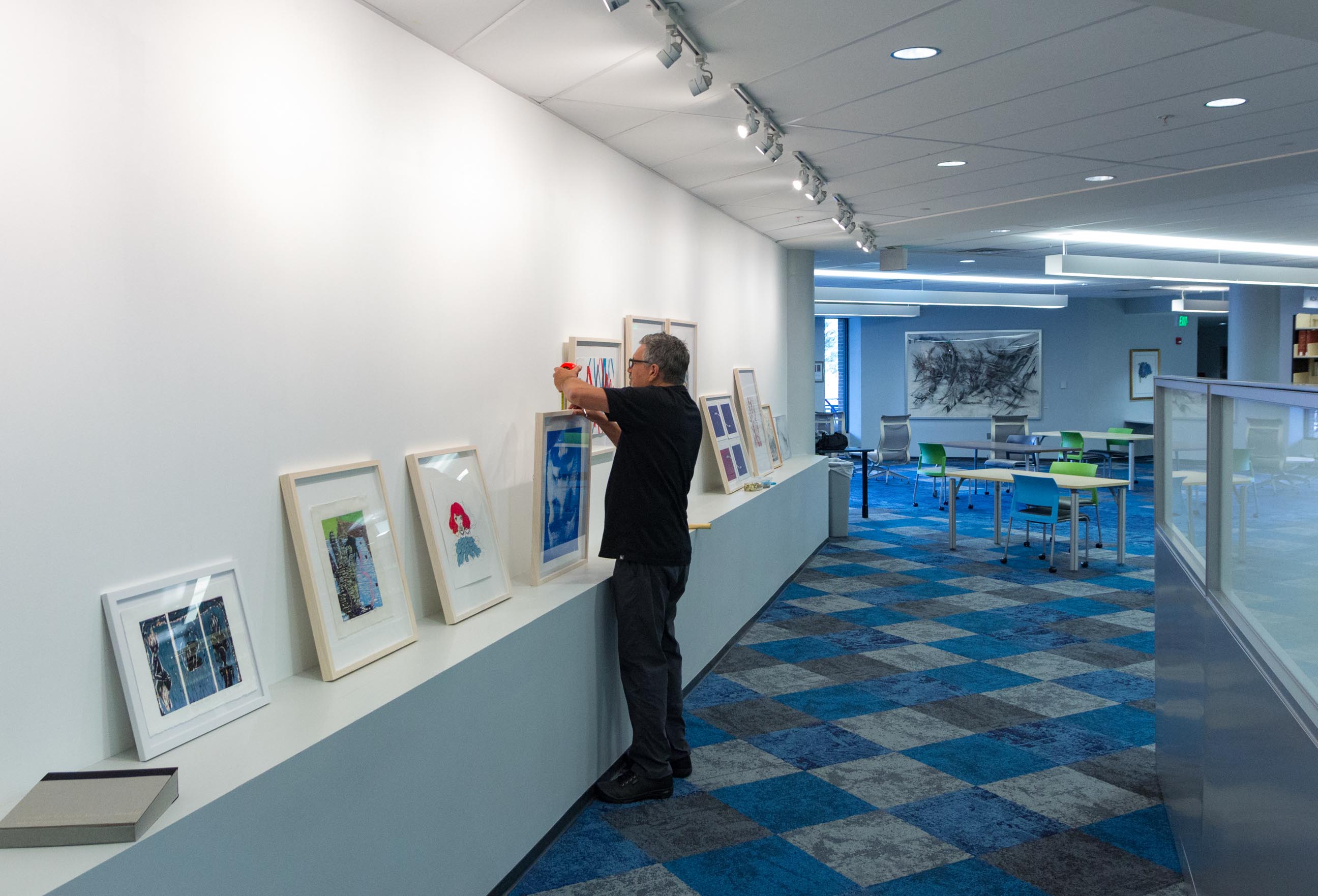 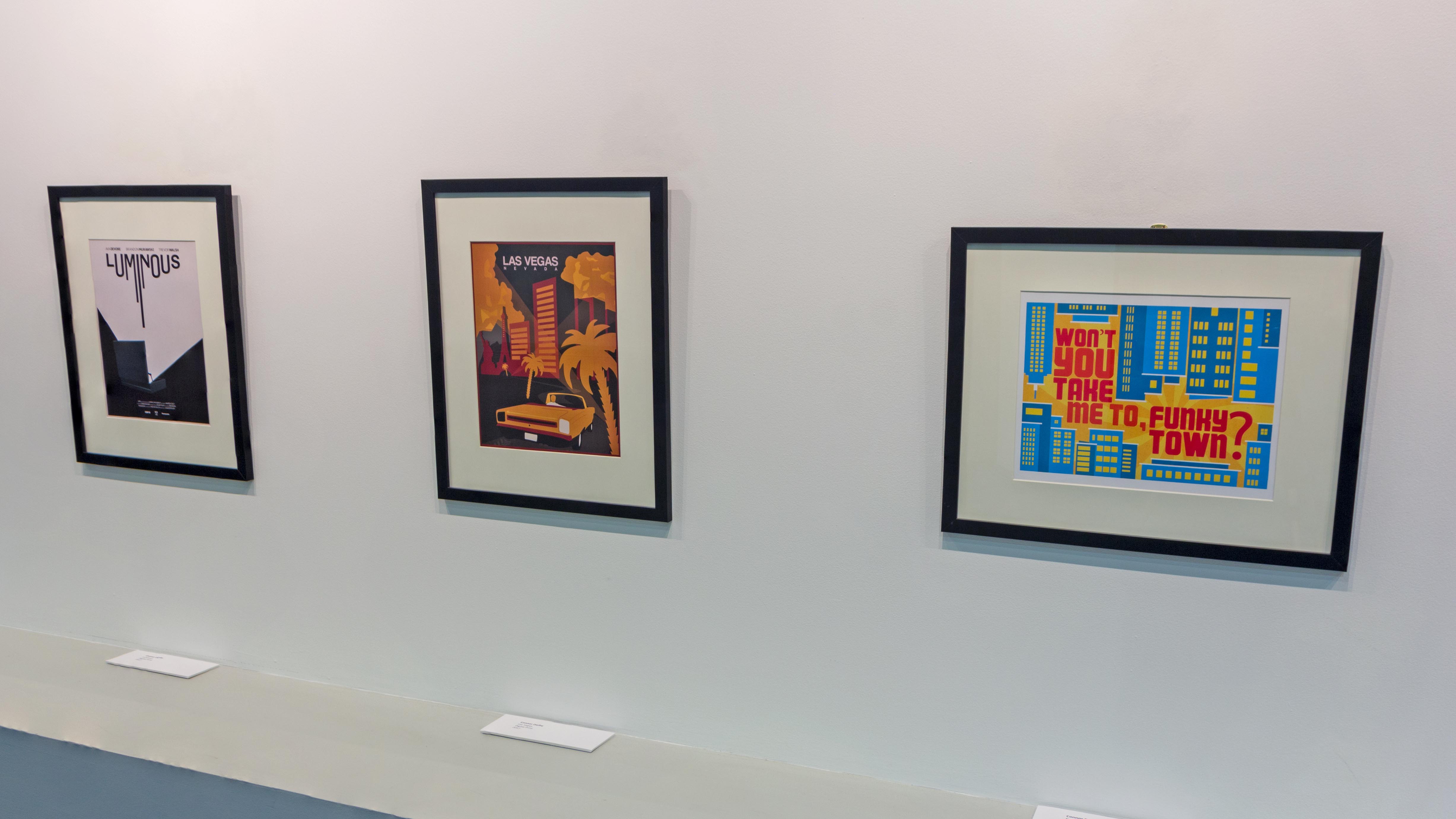 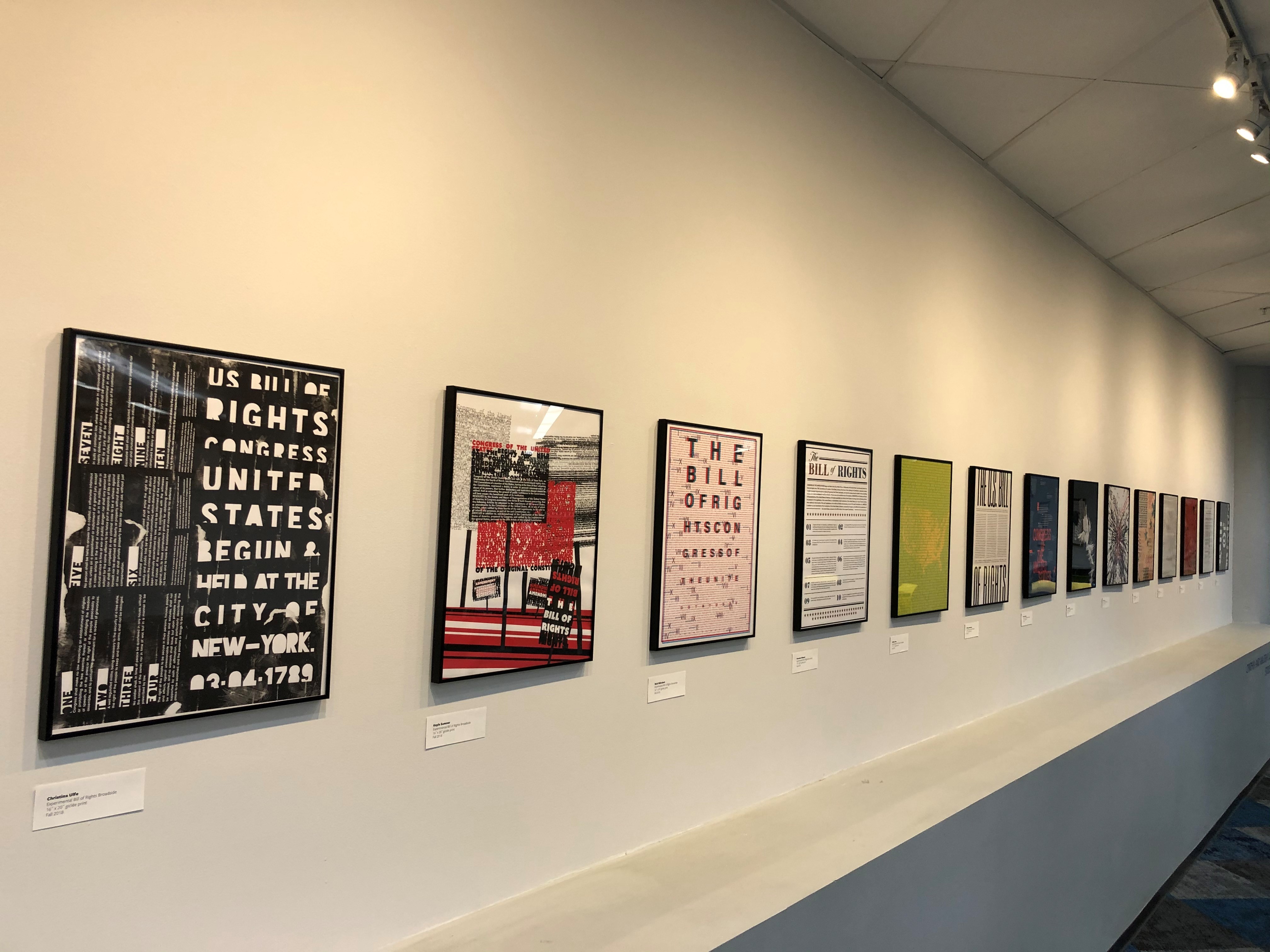 Works produced in the Publication Design course in Fall of 2018

In the Fall of 2018, UNF Graphic Design and Digital Media students were challenged to produce two typographic broadsides of the Bill of Rights: a traditional version designed in black and white and a contemporary or experimental version that could use up to four spot colors.  The broadsides could incorporate only typographic elements (letters, numbers, rules, glyphs or ornaments); no illustrative or photographic imagery.  The students' designs present diverse commentaries on the Bill of Rights, touching on themes of reverence, nostalgia, tension, oppression, distortion, progress, evolution, misinterpretation, commodification, selectivity, clarity and obscurity.

This class is designed to encourage the student to explore possibilities of incorporating the human form into their work.  The class will enable students to develop individual approaches to figurative painting in studio painting session.

Selected works from the UNF Permanent Collection will be used as teaching tools for class projects.  The Permanent Collection is a Teaching Collection with its primary purpose to provide transformational learning experiences for students.  The Collection consists of more than 450 works of art that were donated as personal or corporate gifts, or purchased by the University.  The works span from the 16th century to the contemporary period, and represent various media such as painting and drawing, ceramics, photography, sculpture, textiles, and printmaking.

For this project, students explored the rendering of 'skin' in paint, examining works from teh Permanent Collection and their own bodies for inspiration in order to create small-scale studies of skin. 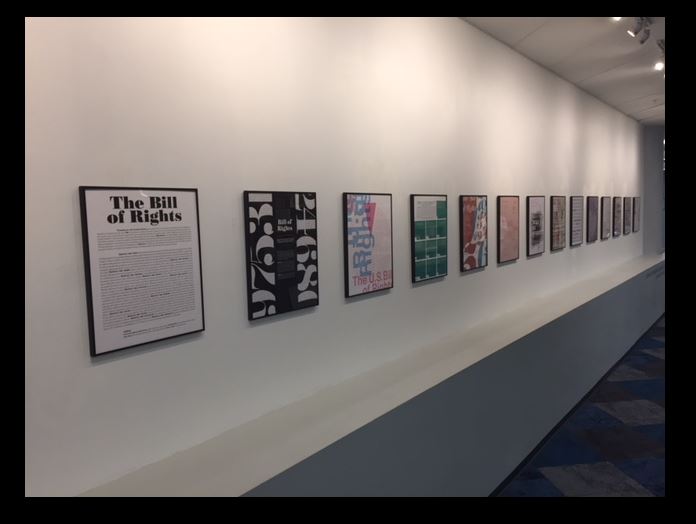 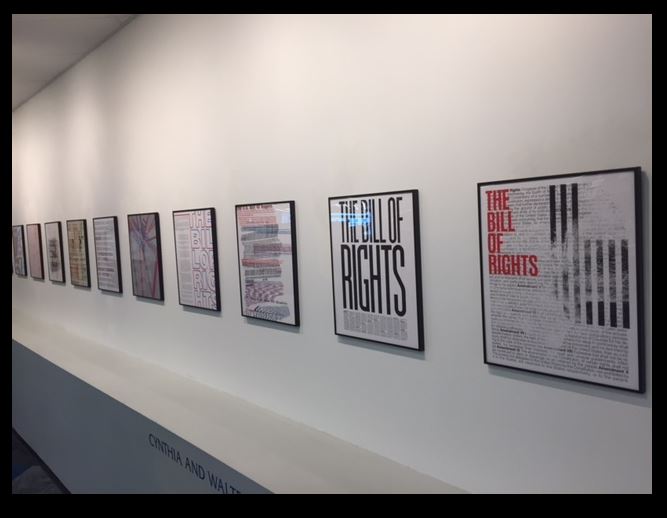 The Conventions of a number of the States, having at the time of their adopting the Constitution, expressed a desire, in order to prevent misconstruction or abuse of its powers, that further declaratory and restrictive clauses should be added: And as extending the ground of public confidence in the Government, will best insure the beneficent ends of its institution.

—from the Preamble to the Bill of Rights

The Bill of Rights comprises the first 10 amendments to the Constitution and enumerates American citizens’ rights in relationship to their government. Written by James Madison in response to calls from several states for prohibitions on governmental power, it guarantees freedom of speech, press, religion and assembly; it protects the right to keep and bear arms; it sets rules for due process of law; and it reserves for the people or the states all powers not delegated to the federal government. Of the 19 amendments originally drafted, 12 were eventually proposed by the First Congress in 1789. Ten of these were ratified by three-fourths of the state legislatures in 1791 to become the Bill of Rights. The United States has continued to add amendments to define and protect our personal liberties, including the 15th Amendment, giving the right to vote to all men, regardless of race (1870), and the 19th Amendment, which expanded those rights to women (1920).

In a pre-digital era, the dissemination of such important information to the nation’s citizens took the form of newspapers, pamphlets and broadsides. The precursor of the modern poster, a broadside was a large piece of paper printed on just one side. In the late 1700s, the proposed 12 amendments and, subsequently, the ratified Bill of Rights were both printed as broadsides for distribution in the states.

In Fall 2017, UNF Graphic Design and Digital Media students were challenged to produce two typographic broadsides of the Bill of Rights: a traditional version designed in black and white and a contemporary or experimental version that could use up to four spot colors. The broadsides could incorporate only typographic elements (letters, numbers, rules, glyphs or ornaments); no illustrative or photographic imagery. The students’ designs present diverse commentaries on the Bill of Rights, touching on themes of reverence, nostalgia, tension, oppression, distortion, progress, evolution, misinterpretation, selectivity, clarity and obscurity.

Department of Art and Design 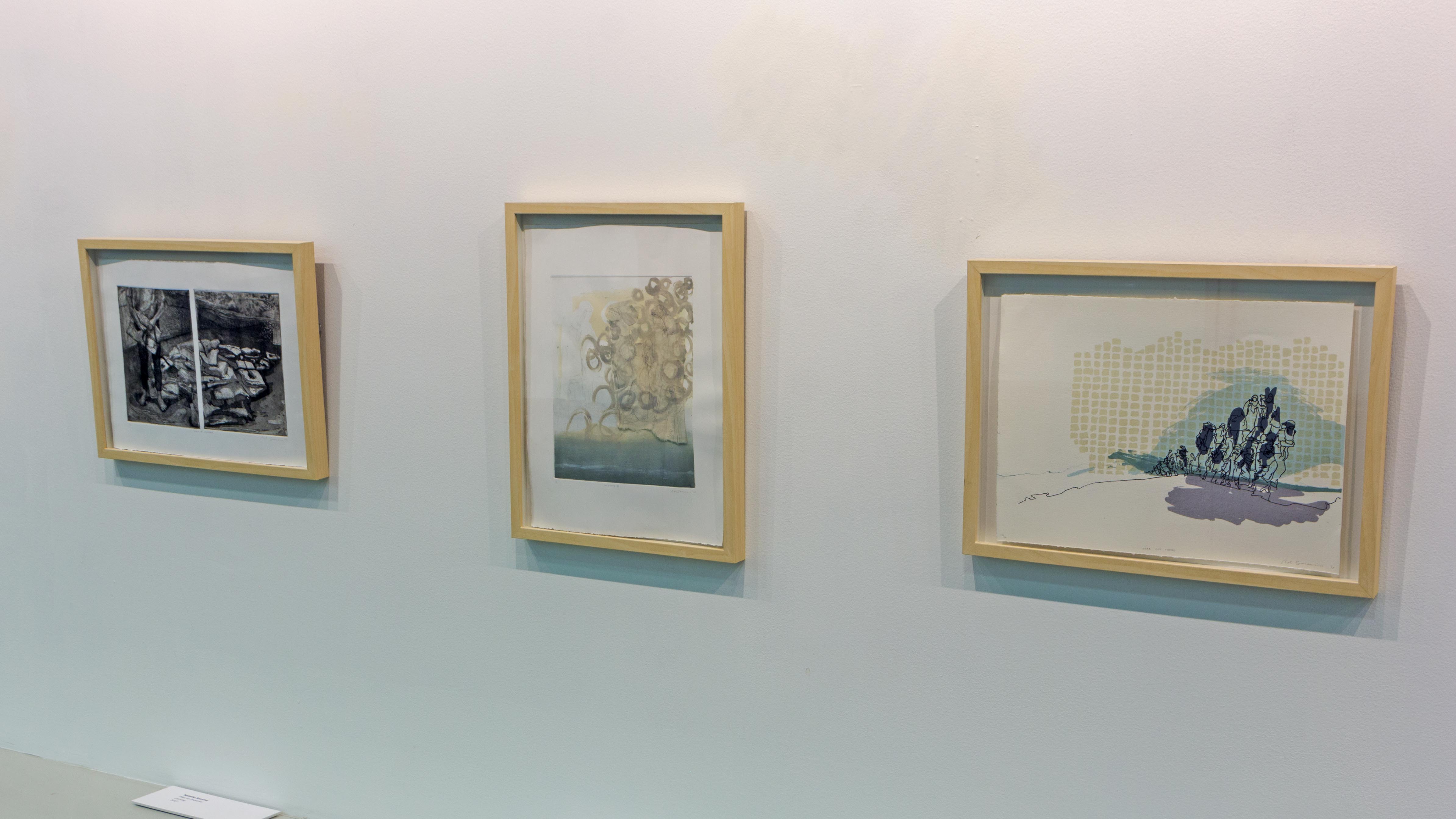 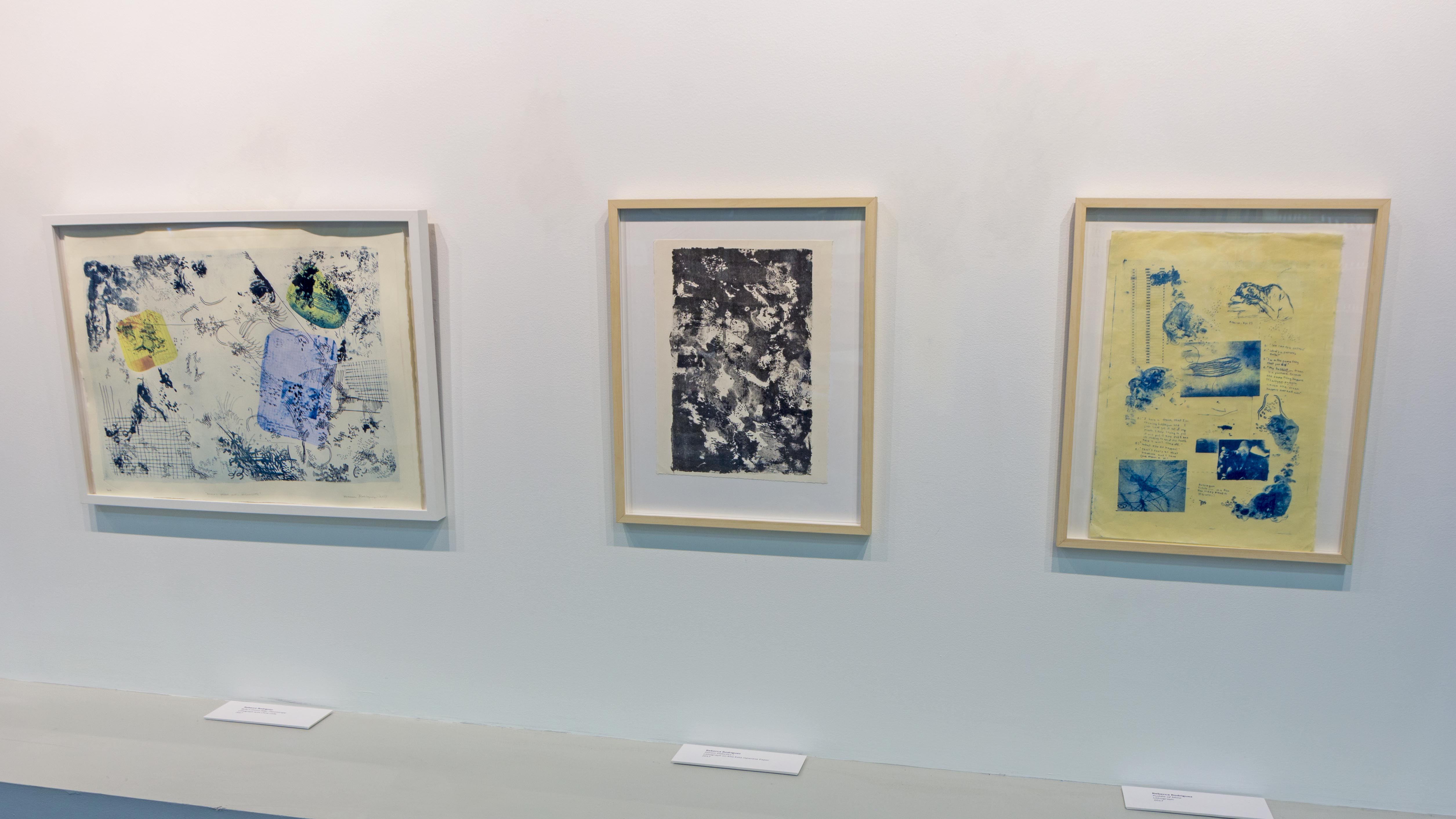 This class was designed to amplify skills techniques and understandings that were introduced in earlier drawing classes, and to expand the students' ability to use drawing in a meaningful way. Drawing was approached as both a visual exercise and a technical one. Communication through visual means was explored. Through a combination of lectures, demonstrations and work in classroom, the students understood drawing from the conceptual level to production.

Projects offered insight into the appreciation of the inadvertent mark, the use of transparent grease in order to fix powder to paper, exploration of Pareidolia (the tendency to perceive a specific, often meaningful image in a random or ambiguous visual patters), examination of petroglyphs and pictographs, Palimpsest (reusing surfaces from previous projects that still retain the project's image), Trompe l'oeil ('fool the eye'), and the use of found objects to produce work.

More information on Palimpsest in Art

More information on Pareidolia in Art

This exhibition is the result of students' work created during the Special Topics Class Edition: Printing and Publishing, Summer 2017 and the premiere of the UNF Art and Design Fine Arts Print Publishing Initiative.

This Special Topics course addresses all aspects of editioning fine arts: from creating a printing element to producing a series of identical prints. Students choose a variety of techniques for their individual projects and learn about the ethics of creating state and color proofing, editioning, curating and sigining a print. Course also addresses professional practices of publishing, distributing and marketing.

Concurrently to learning how to edition their own work students enrolled in this class contributed in the development of the UNF Art and Design Fine Arts Print Publishing Initiative, an educational enterprise that invites visiting artists to create an original fine art print to be editioned in collaboration with our printmaking faculty and students. Each year a guest artist will create an edition with students that will be available for purchase to museums, collectors and the public. Funds amassed from sales will sponsor a subsequent edition. 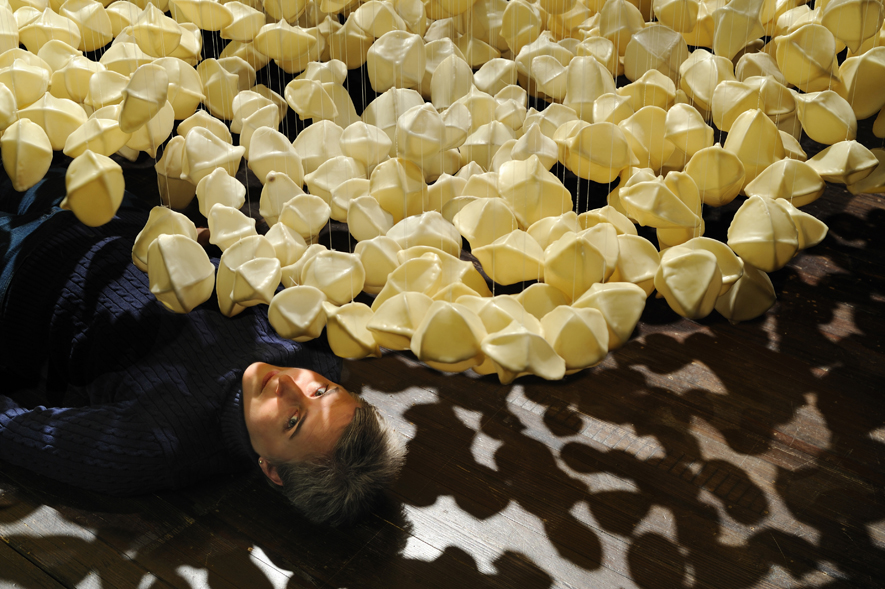 Students enrolled in this class were involved in all curatorial, production and entrepreneurial processes of this inaugural print by New York installation artist Lorrie Fredette. UNF students had the opportunity to meet with the artist, discuss this edition and participate in all steps from production to marketing.

Currently exhibiting at UNF Gallery at MOCA, Lorrie Fredette lives and works in the Hudson Valley of upstate New York. She has long been inspired by medical science and microscopic imagery, which she expresses across a variety of different mediums. This exhibition marks her third unique iteration of The Great Silence and will be the most significant manifestation of it to date. 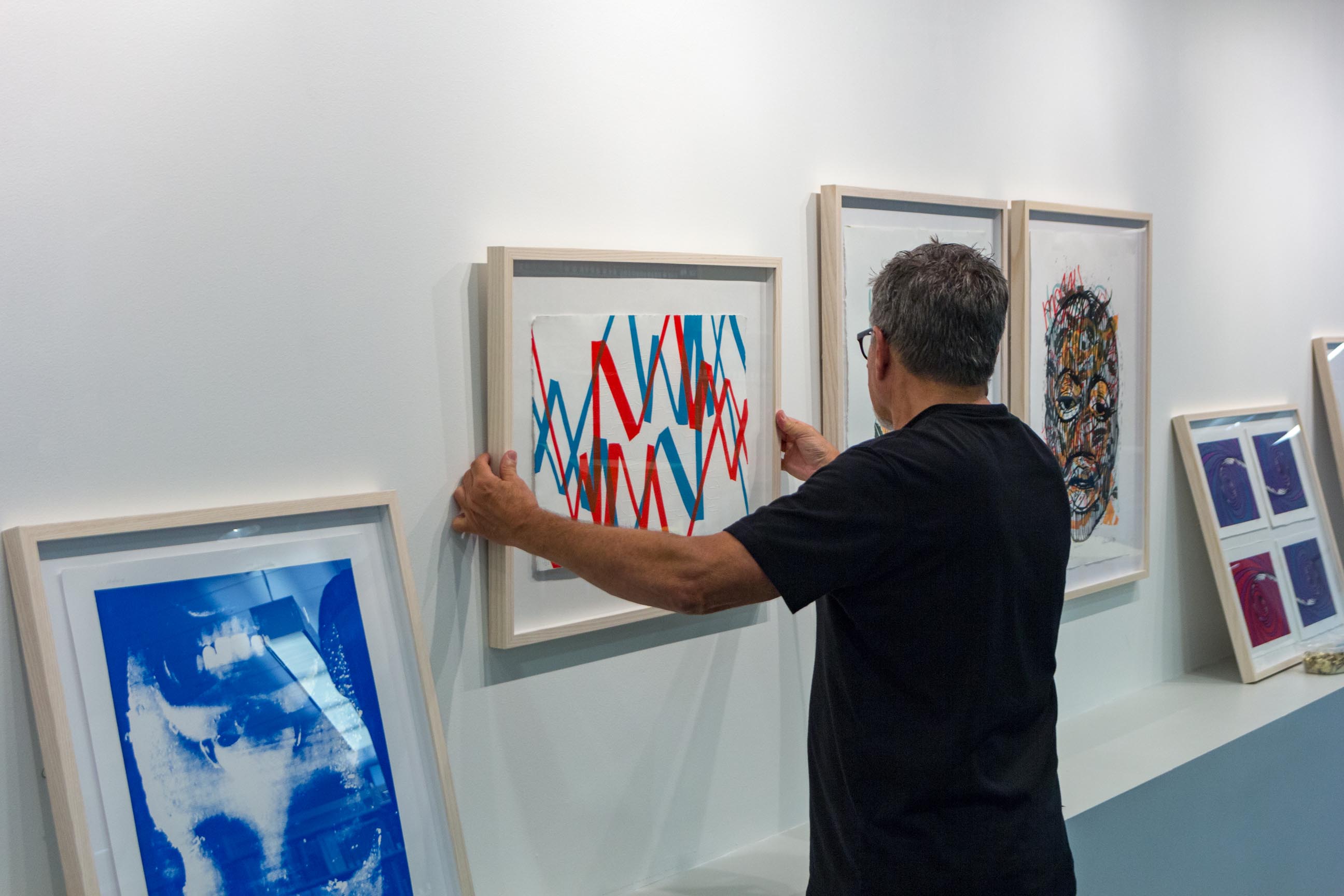